We present element abundance ratios and ionizing radiation of local young low-mass (~106 M⊙) extremely metal-poor galaxies (EMPGs) with a 2% solar oxygen abundance (O/H)⊙ and a high specific star formation rate (sSFR ~ 300 Gyr-1) and other (extremely) metal-poor galaxies, which are compiled from Extremely Metal-Poor Representatives Explored by the Subaru Survey (EMPRESS) and the literature. Weak emission lines such as [Fe III] λ4658 and He II λ4686 are detected in very deep optical spectra of the EMPGs taken with 8 m class telescopes, including Keck and Subaru, enabling us to derive element abundance ratios with photoionization models. We find that neon-to-oxygen and argon-to-oxygen ratios are comparable to those of known local dwarf galaxies and that the nitrogen-to-oxygen abundance ratios (N/O) are lower than 20% (N/O)⊙, consistent with the low oxygen abundance. However, the iron-to- oxygen abundance ratios (Fe/O) of the EMPGs are generally high; the EMPGs with the 2%-solar oxygen abundance show high Fe/O ratios of ~90%-140% (Fe/O)⊙, which are unlikely to be explained by suggested scenarios of Type Ia supernova iron productions, iron’s dust depletion, and metal-poor gas inflow onto previously metal-riched galaxies with solar abundances. Moreover, the EMPGs with the 2%-solar oxygen abundance have very high He II λ4686/Hβ ratios of ~1/40, which are not reproduced by existing models of high-mass X-ray binaries with progenitor stellar masses <120 M⊙. Comparing stellar-nucleosynthesis and photoionization models with a comprehensive sample of EMPGs identified by this and previous EMPG studies, we propose that both the high Fe/O ratios and the high He II λ4686/Hβ ratios are explained by the past existence of supermassive (>300 M⊙) stars, which may evolve into intermediate-mass black holes (≳100 M⊙). * Partly based on data obtained with the Subaru Telescope. The Subaru Telescope is operated by the National Astronomical Observatory of Japan. The data presented herein were partly obtained at the W. M. Keck Observatory, which is operated as a scientific partnership among the California Institute of Technology, the University of California, and the National Aeronautics and Space Administration. The Observatory was made possible by the generous financial support of the W. M. Keck Foundation. This paper includes data gathered with the 6.5 m Magellan Telescopes located at Las Campanas Observatory, Chile. 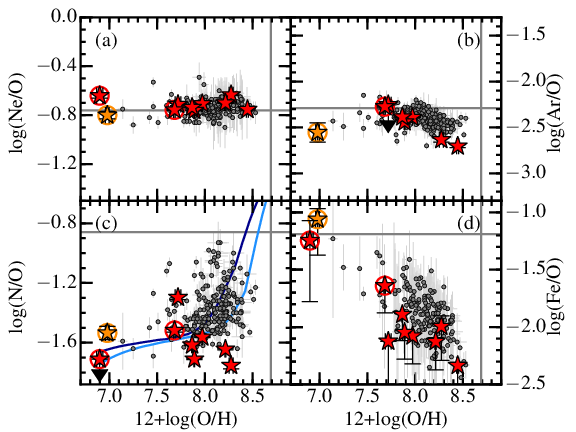 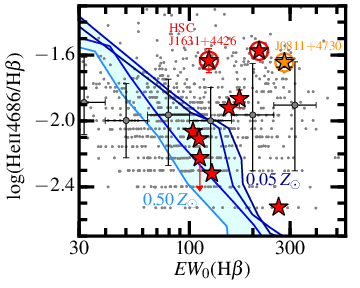 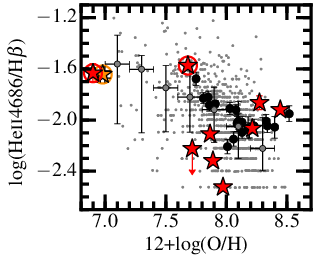