The formation of amino acids in the interstellar medium

Starting with the discovery of various organic molecules including amino acids in the Murchison meteorite, the notion of an origin of life in space is gaining momentum through many new discoveries, e.g., the first observation of chiral molecules in interstellar space. Amino acids exist in L- (left-handed) and D- (right-handed) forms with equivalent chemical properties, but more than 99% of amino acids in life on earth are L-forms, an effect called homochirality. The reason for homochirality in life on earth is a mystery.

Amino acids found in the Murchison meteorite and other meteorites have been reported to have an excess in L-form. These findings suggest that organic molecules, which are the origin of life, may have been formed in interstellar space and transported to earth by meteorites. In this project, the formation process of amino acids in interstellar space is investigated using quantum chemical calculations. Interstellar space is much colder (~10 Kelvin) and less dense (about $10^{-20}$ grams per cubic centimeter) than on earth. Our goal is to investigate the possibility of forming amino acids necessary for life on earth by calculating the molecular formation process in interstellar enviroments. Recently, using the open quantum chemistry code Gaussian09 (Frisch et al. 2009) and the SAC-CI method (Symmetry Adapted Cluster Configuration Interaction ), we calculated the formation process of glycine from the precursor to the transition state. This allowed us to estimate energy barriers and other factors to the transition state, and to calculate the timescale of the transition in interstellar space (Kayanuma et al. 2017). In the future, we will explore the formation of more complex and mirror-isomeric (chiral) amino acids such as alanine. We will also consider the possibility that the circularly polarized light in space may have caused the L-form excess and investigate what the L/D-form ratio of amino acids would be in space by calculating the difference in optical absorption rates (circular dichroism) for right-handed and left-handed circularly polarized light. 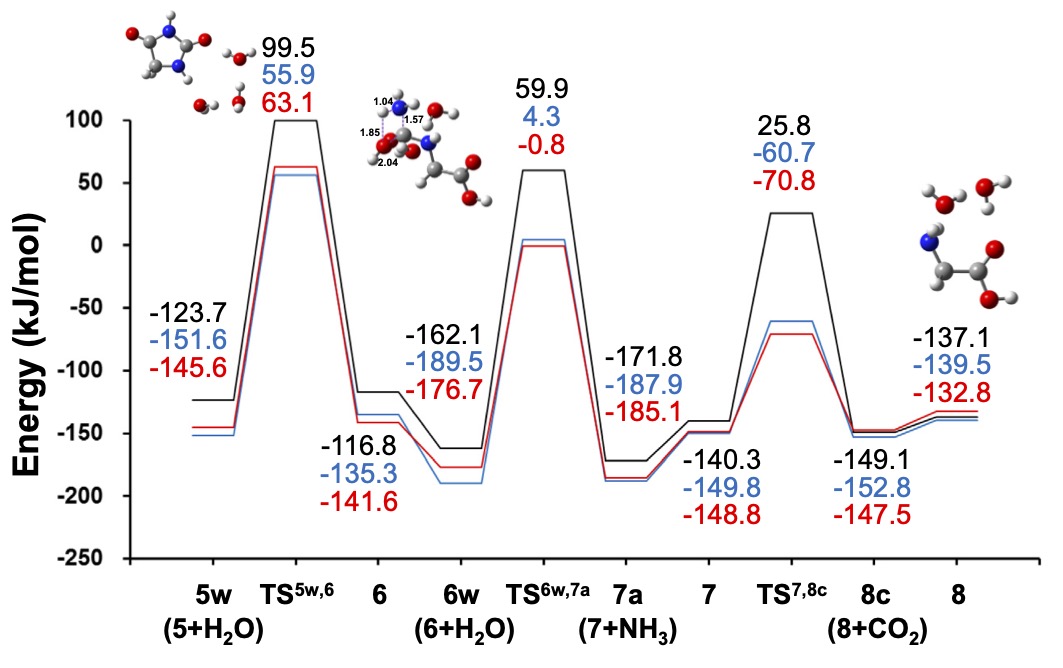