A new paradigm in AGN feedback

Galaxies and the supermassive black holes at their centers are known to co-evolve through cosmic time, but how this occurs is still largely unknown. The current belief is that black holes can regulate the star-formation in galaxies by removing gas through outflows driven by relativistic jets, winds, and radiation. However, some new observations of massive galaxies show neither outflows nor a cessation of star-formation, but strong turbulent gas dynamics.

We propose a new paradigm in galaxy formation that contributes to coevolution and ask: "Do supermassive black holes affect the evolution of galaxies by generating strong turbulence in the interstellar medium?"

Fig. 1  Our recent relativistic hydrodynamic simulations of black-hole jet feedback (Mukherjee2018 et al 2018). Left: Evolution of an inclined jet propagating into and dispersing a massive turbulent galactic disc. Right: Top view of the star-formation rate in the disc before and after a jet interacted with the interstellar medium.

In a universe filled with dark matter, gas, and radiation, the main driving force that creates "structure" -- everything from clusters of galaxies to individual stars -- is gravity. Supermassive black holes (SMBH) at the centers of galaxies can launch outflows through jets, winds, and radiation, that counteract the gravitational infall of gas and regulate the formation of stars and the growth of the SMBH. This is called "SMBH feedback".

In several of our recent simulations (Wagner et al 2016, Mukherjee et al 2018, see Fig. 1) and recent observations by colleagues Nesvadba et al (2011), however, no significant outflows are observed, yet star-formation is strongly suppressed. Is there more to SMBH feedback than outflows?

One solution to the problem of suppressing star-formation without outflows may be strong turbulence in the interstellar medium (ISM) driven by SMBH activity, a phenomenon that as yet remains unexplored. In the galaxy 3C 326, for example, the SMBH activity is a relativistic jet, but SMBH winds and powerful radiation may also be responsible.

A quantitative theory of SMBH-driven turbulence does not yet exist. In this project we take the first investigative steps into this conjecture with the key scientific question "Can SMBH activity regulate star-formation through injection of turbulence?" and elucidate the physics behind the process.

To test the new idea, we shall:

If we find out that SMBH-driven turbulence significantly alters the star-formation conditions of galaxies, and explain how this physically works, it will introduce a new paradigm in the astrophysics of SMBH feedback and galaxy formation. 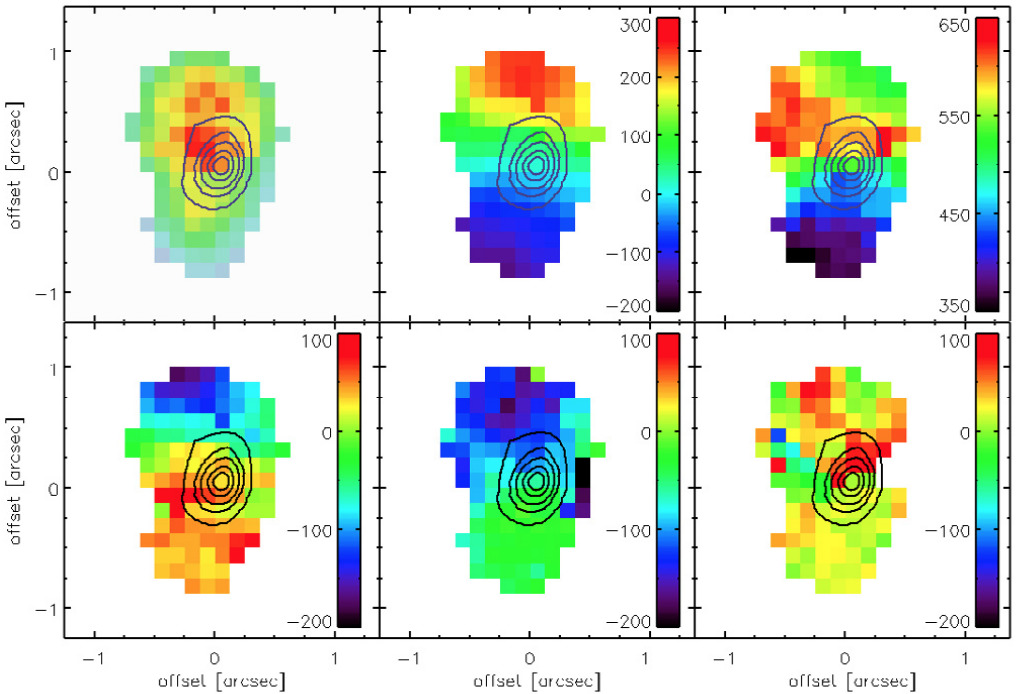 The properties of the turbulence predicted in the simulations will be directly compared to observational data. In particularly, we aim to work with existing and new ALMA, JVLA, and VLT SINFONI data of the galaxy 3C 326 and of 6 selected new high-redshift galaxies that are candidates for AGN turbulence regulated massive galaxies. Radio, optical, and infrared emission will be calculated from the simulations. Signatures of turbulence are wide and asymmetric line profiles, as shown in Fig. 2.