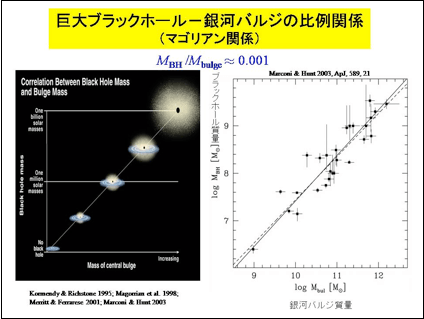 Supermassive black holes (SMBH) have been observed in a large number of galaxies, but their origin and formation is still unkown. In the standard theory of galaxy formation, galaxies grow by successive mergers of smaller galaxies. If every galaxy had a black hole, then one could imagine that, after merging, a galaxy might end up with multiple black holes in the center, but this would be at odds with observations. We have used the FIRST Simulator at the Center for Computational Sciences, University of Tsukuba, to simulate for the first time in the world the gravitational n-body interactions and mergersof multiple black holes at the center of a galaxy taking into account general relativistic effects. Following the dynamics of initially 10 black holes and 500,000 star particles for over 100 Million years, we find that the black holes at the center of the galaxy continuously merge and grow. This is a milestone discovery that explains the origin of supermassive black holes. This work is published in the Astrophysical Journal Letters.

Supermassive black holes at the centers of galaxies 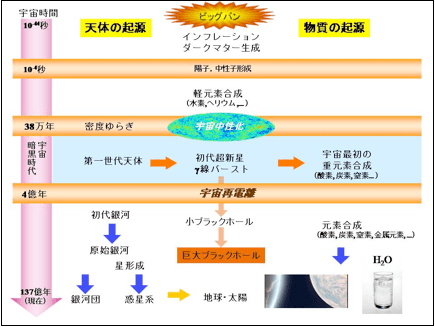 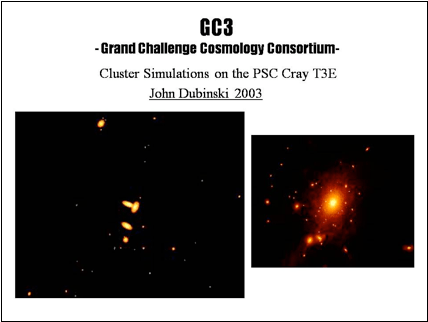 In the current cosmological paradigm of galaxy formation, the density fluctuations in the post-big bang universe magnified and collapsed to form bigger and bigger objects. Stars then galaxies. The first galaxies were fromed over 13.5 billion years ago from mergers of small galaxies (Figure 3). If each of the galaxies had a black hole with a mass according to the Magorrian relation, those black holes would be incorporated in the merged galaxy and wandering around the center. However, observations tell us that mostly only one supermassive black hole exists in the center of a galaxy, so the individual black holes must have merged, but a proper explanation for this is still lacking.

One of the major questions of supermassive black hole formation is in fact why there is only one black hole at the center of a galaxy. 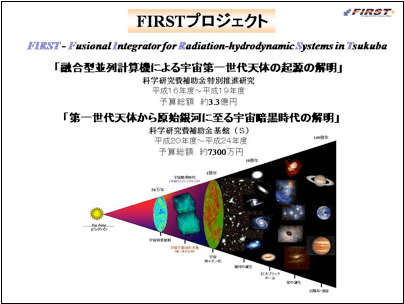 To follow the evolution and merging of multiple massive black holes in the center of a galaxy, it is crucial to perform N-body simulations incorporating the effects of general relativity and ensuring very high-performance computing. 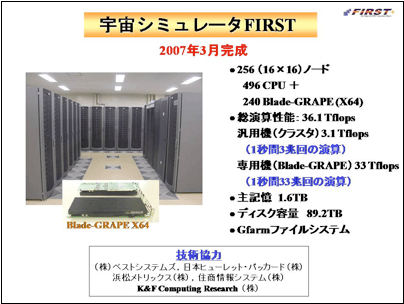 At the University of Tsukuba, we began the FIRST project in 2004, and completed the FIRST Simulator in 2009, a supercomputer designed to accelerate the numerical simulations of the formation of first stars, galaxies, and black holes. Figure 4. 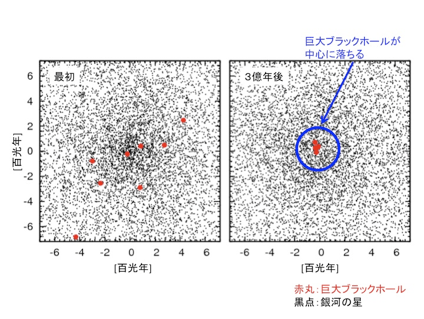 The first Simulator uses Blade-GRAPE technology to calculate gravitational forces with high precision and speed, and posesses 256 computational nodes (496 CPUs) of which 240 nodes have Blade-GRAPE integrated. FIRST's peak performance is 36.1 TFlops (hosts: 3.1 TFlops, Blade-GRAPE: 33 TFlops). A hybrid parallel supercomputer such as this is a pioneering effort in world standards.. We have used the FIRST Simulatior to tackle the outstanding problems of supermassive black holes formation, and have found new results based on over a year of calculations. 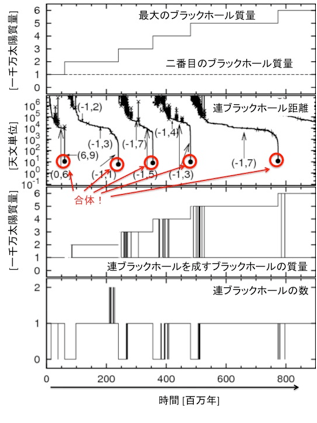 Using high-precision and high-speed simulations incorporating the effects of general relativity, we have solved the evolution of 10 black holes and 500,000 stars over 100 Million Years./

The most important results from our simulation are shown in the uppermost panel of Figure 6. A single supermassive black hole is formed from successive mergers of some of the 10 massive black holes. Not all of the 10 initial black holes have merged. From the second panel showing the binary distance as a function of time, one can see how the merging progresses. Black holes merge when their distances are reduced by more than 7 orders of magnitude.

Why does only one black hole keep growing? The second panel from the top of Figure 6 shows that a massive black hole remains in a binary state for quite a while before merging. Other black holes often interact with this binary but are never able to break it apart, and so the first binary created will always grow by successive mergers to the final supermassive black hole.

Our simulations follow the orbits of black holes up to the point that they can merge through the emission of gravitational waves, so the possibility of growth of black holes through mergers is proven without a doubt.

We have described our recent innovative results performing long-duration simulations with the high-precision high-speed FIRST Simulator. This result is a milestone in the understanding of the origin of supermassive black holes at the centers of galaxies. Based on this research, new advances can be made in the theory of black hole formation since the early universe through cosmic time.